Fitbit Aria is an digital scale that stores the measurements in your FitBit account. It’s the best digital scale I’ve used, but also the most expensive.

After driving 17 hours with the Aria packed in our luggage it stopped working, displaying only:

which is a sensing error described at fitbit help. None of the steps suggested help articles made any difference, so I assumed the sensors had been damaged (squashed too much). The Fitbit support team tried to help, and even offered to replace the unit, but I decided to try to work it out for myself.

Undo the two screws behind the Aria adjacent to the battery compartment: 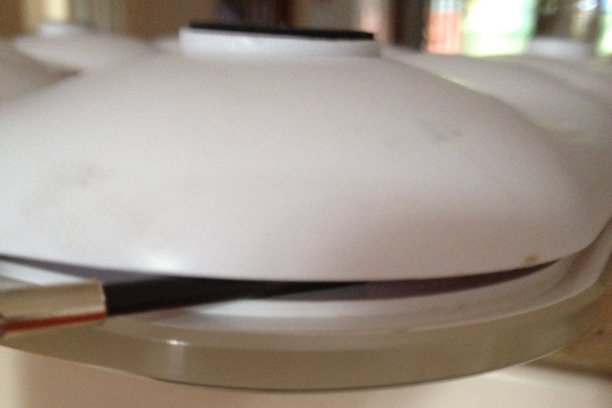 Using a thin flathead screwdriver, carefully separate the entire rear cover from the front. It needs to lift around 2cm, so work around each corner raising it a little at a time. Be careful to not separate the rubber seal that’s glued to the glass. 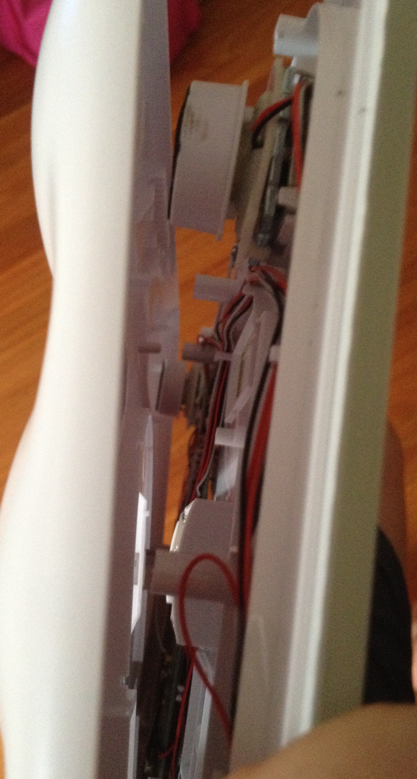 It will eventually start to separate. The case will try to bite your finger if you stick it in there too soon. 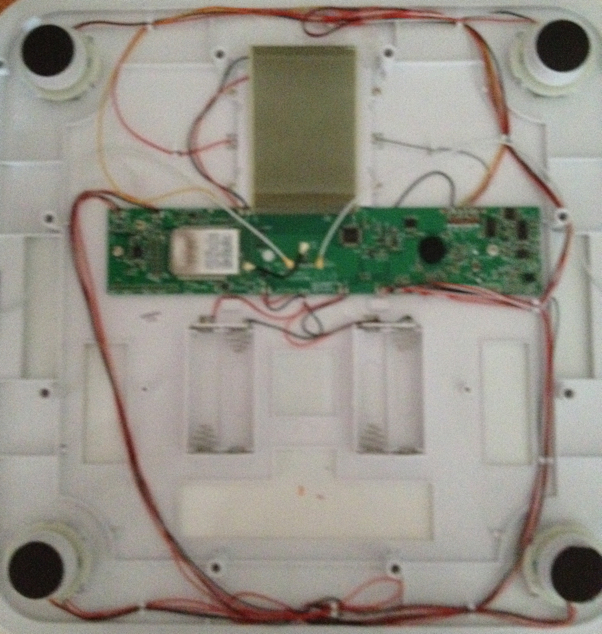 The main board and sensors are screwed to the chassis behind the glass.

Starting with the sensors, there’s four typical load sensors, one mounted under each foot of the scale. These look like standard strain gauge sensors using a wheatstone bridge to measure tiny variances in the resistance as force is applied to the sensor. Each sensor has three wires: a common ground, excitation and sensor, which each lead to the main board. 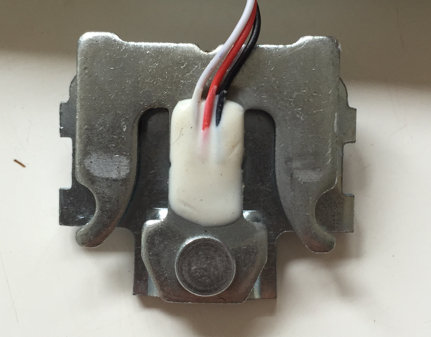 I guess these sensor outputs connect to an amplifier on the main board before going to the ADC of the microprocessor. One of the sensors also includes a contact switch that provides the signal that someone has stepped on or off the scale. Don’t open it open because it’s a bitch to get back together again.

My hypothesis is that once of these sensors has been bent through excessive force and no longer outputs a meaningful sense voltage. They’re pretty sturdy though. The plastic frame of each sensor also appears to provide a little bounce-back so perhaps just the plastic is bent too much. Aside from testing the sensors individually I’m not sure how to check that.

Taking a look at the main board: 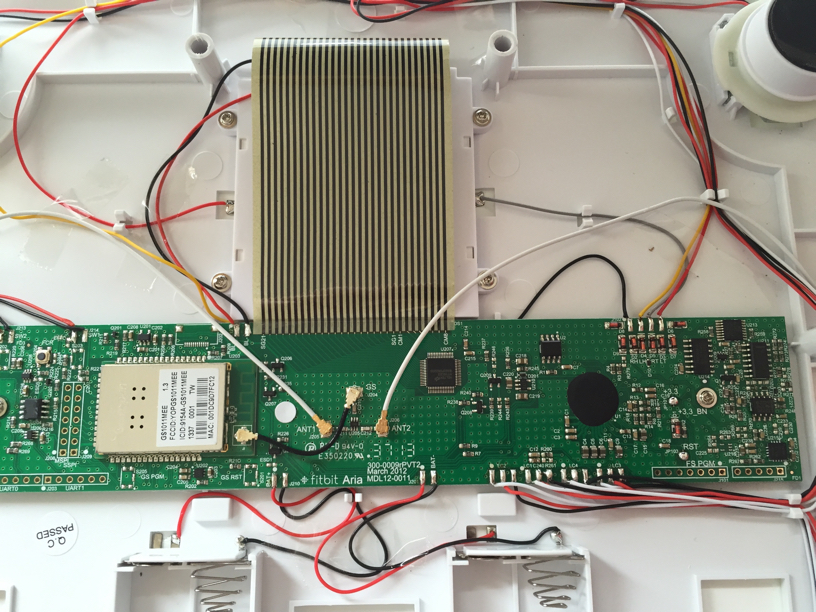 The beautiful custom LCD is driven by a HOLTEC HT1623 RAM Mapping 48x8 LCD Controller. The controller features a serial input that’s used to load data into RAM to set the value for each of the 48x8 segments. The controller does the rest of the work to drive the LCD. 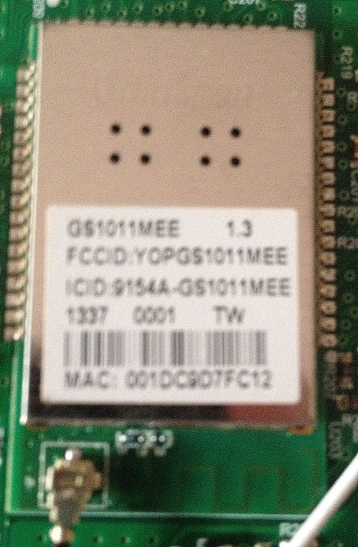 To the left of the mainboard is the GainSpan GS1011MEE WIFI Module. These modules are great as they provide everything needed in a single PCB module that has serial and other interfaces to controller it. The module is connected to two embedded antenna by Ethertronics mounted at the sides of the scale.

Unfortunately the main IC in a “Chip on Board” package which means I can’t see what it is (the black blob of epoxy). The underside of the mainboard just includes test points and various routes.

Taking a look around the main IC are peripheral chips that help with the I/O: 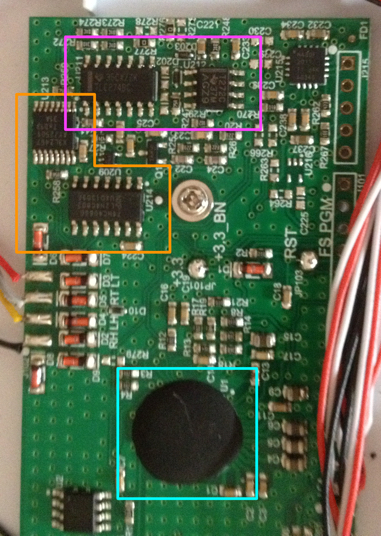 The larger peripheral chips include:

The main chip is probably a standard embedded controller with digital I/O, some ADC inputs and serial I/O. I can’t tell what it’s using to communicate with the GainSpan Wifi.

Unfortunately no amount of non-destructive fiddling could make the sensing error go away. If you have some ideas or know me than me please leave a comment.

Motivated by comments below from Jordan Heywood and John Blackmore I connected a terminal to UART1 of a working Fitbit Aria. I used a FTDI TTL-232RG-VIP-WE. 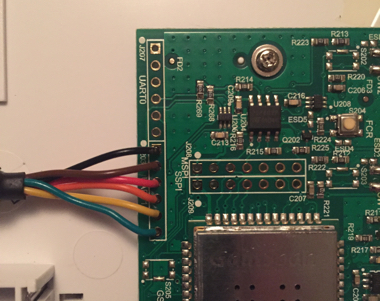 I don’t have the unit that failed anymore but these logs may help others. The main difference seems to be the working unit successfully gets a tare while the others fail. The “readn checksum mismatch” seems to be normal. I don’t think it’s a problem in the software/firmware but at the sensor output/analog input.

The UART1 port is interactive. After power-on from battery type “?” to get to the console.

I didn’t learn anything actionable from the console but others may be able to test their defective units. Please post back if you learn something. References to the scale processor as “Fortune” point to one of measurement ICs by Fortune