This very long bio explains my journey so far. It's a work in progress as I try to distill some of the experiences that led me here. You probably don't want to read it. Seriously. See the short bio instead.

Born in Western Australia in the late 70s. My mother was a primary school teacher and my father a mechanic. My mother’s give me my over-commitment to work, and my father’s gave me the attitude I can fix anything. 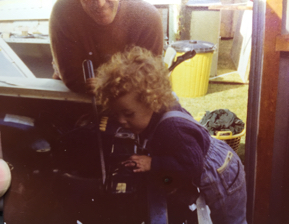 In our childhood my brother and I were brought up learning electronics, fixing cars, using tools, writing stories and being creative. We loved our Commodore 64. We loved the games of course, but a family friend introduced us to programming the ROM BASIC, cracking and copying games and what made the pixels move about on the tv.

I was 12 I was accepted into a computer scholarship at my brother’s high school (Willetton SHS). For computing, the school was amazing; five dedicated rooms of Nimrod 8088 XTs and programming and computer classes twice a week. The norm at other schools was two shared PCs per class room so this was far ahead for the time. On my first day the teacher was disappointed I didn’t know how to reset a PC with Alt-Ctrl-Del.

Within a year we’d formed a posse of programmers at the school, including my brother, that could out-code most computing teachers. At the time it was very uncool to be interested in computers, so our awesome activities were largely unknown. Most days after school we’d meet at the computer rooms and code our games or works for the demoscene. We’d switch the lights and VGA monitors off when the security guards approached so we could stay later. I remember we’d get in trouble for setting off the school security alarm, but don’t remember our parents being unhappy we were getting home late. There’s worse ways to spend your time as a teenager. 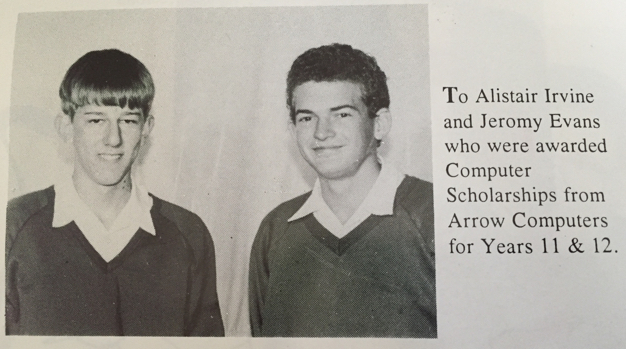 At the end of my 10th year I won a computer scholarship sponsored by a local computer store. The applicants had to complete a programming test in Turbo Pascal that involved reading a text file, sorting some values depending on user input and outputting the result. At the time we couldn’t rely on external libraries (or I didn’t know they existed) so I implemented a simple bubble sort. 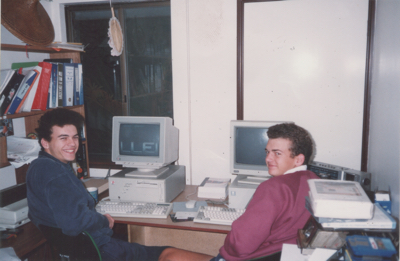 Our class formed a pseudo-business to create apps to print the school’s ID cards manage school sports results. Other kids in that class were extremely talented programmers, but we were isolated to our internal network and a few dial-up BBS’s.
It wasn’t until university that we discovered the internet and fledgling world wide web. I finished school as dux in computing and dux in applied computing.

Towards the end of this year we will purchase a CD ROM and Sound Blaster card to allow upper school students to produce presentations and programs for Multi-Media, a very exciting and ever expanding area of computing.

At university I was intending to study computer science, but made a last moment switch to computer systems engineering despite missing the prerequisite chemistry and maths. I loved it. While the programming was elementary for the first few years I loved learning the electronics, embedded software, artificial intelligence and mechanical engineering. Uni integrated the topics I loved, and gave me plenty of ideas to work on at home. For my summer internship I worked at the Australian Telecommunications and Research Institute (ATRI) were I developed a pi/4 DQKSK modem running on a Texas Instruments DSP. For another internship I developed a high voltage motor control system. In class, a recurrent feed-forward neural network backgammon game with some very talented team mates.

My final project at uni was part of the Robocup competition, a game that advances AI by getting autonomous robots to play soccer. We had a team of mini robots from MIT. My project was to design a mobile robot path planning and control algorithm that could manoeuvre the robots along a spline curve. It was fun. I finished uni with joint-top student seminar, first class honours, on the VC list (top 1%) and with a 96% result for my thesis.

After graduating as a computer systems engineer I accepted a role at an organization that performed submarine research and development for a defence organization. We worked on an island. As soon as I joined I was thrown into writing user interfaces for 16 channel [lofargram analysis]](https://www.google.com/search?q=lofargram+analysis&tbm=isch). My role was to create the real apps or gadgets (“concept demonstrators”) based on the theory of the researchers.

I still did a lot of programming as well as electronics work there. Submarines and the underwater environment are incredible complex that few people even think about. One of my favourite outcomes was some hardware and software that could intercept serial data lines and inject messages to change the behaviour of the systems. Nothing evil, genuinely useful, that spent many years in-service on the submarines until it was commercialized by Raytheon.

In my spare time I also wrote software to perform technical analysis of stock market trades.

After a few years with the organization I was seconded into a role as a systems architect for the integrator for a major upgrade of the combat system of the Australian submarines. We were becoming a varianet of the US AN/BYG-1 submarine control system program), integrating it to a our French sonar and adapting the Australian systems and equipment to make it happen. For me it was the perfect combination of complex software, hardware and people. Over this period I regularly worked somewhere between Perth, Sydney, Canberra and the USA for the program office for design reviews, integration, requirements and modelling.

By 2004 I’d started another programming project in my spare time, having mostly recovered from that epic data loss. I’d bought a house and, as I was interested in property investment had written a program that would scrape the national property websites and analyse them for investment opportunities. It searched for properties by their projected cash-flow based on deep analysis of property attributes and searcher’s finances.

I left the defence industry and founded my first company, Blue Sky Minds, in 2005. The plan was that two or three days a week I’d consult to businesses to apply some of my integration and engineering knowledge (to pay the bills), and the other days I’d work on the search engine (called HousePad). Through friends in the defence industry I was introduced to an enterprise software company working on sales order automation that needed help designing their domain model and processes. When they realized I could also code in Java I was also drawn into implementing it too.

On the other days I continued developing HousePad. I didn’t have all the data I needed to complete the cash-flow modelling accurately; the two most significant gaps where depreciation and land tax. I reached out to a business called Depreciator that specialized in developing depreciation schedules for properties and landed on an opportunity to write a tool of them to estimate depreciation that would let me apply the same models within the search engineering. I wrote it in .Net for free as a mutual IP exchange, with a trailing commission on their sales that still trickle in today. I also created “landtaxapp” that could lookup the land tax valuation from the government authority (which turned out to breach their Ts&Cs).

In 2007 the enterprise software company I was contracting to went into liquidation. They had severe cash-flow issues, using the cash from the next customer to fund the work for the previous, until the next customer said no. Unfortunately I was an creditor. There I learnt a lesson about trust, but I also found it fascinating to learn what happens (technically and behaviorally) when money runs out at a business. The other upside as that a few of us saw the opportunity to wrench one of their clients from them to take on the project directly. That’s when I began working directly with PeopleInsite, a document automation start-up at the time that would later become enableHR.

I continued contracting to PeopleInsite a few days a week and HousePad on the other days, but a pattern emerged that I would also put other customer’s projects as I higher priority than my own. I was a far better an engineer than a business person. For the thousands of hours developing Housepad between other project, I’d never once put it in front of a real customer. That’s stupid (see the Lean Startup Methodology.

Over this period of my life I started getting a lot more interested in entrepreneurship and business. I signed up for Bootup camp, a “startup weekend” formula that spanned a full two weeks so the teams build something valuable. It was a fantastic way to learn to ship code and talk to customers. We formed a team called OpenOnDemand that would deploy on-demand open-source cloud-based applications. The best thing about start up weekend is that it forces you to focus. It makes attendees realise how much they can achieve quickly.

Shortly after Bootup Camp I was asked to become a shareholder and full time employee of PeopleInsite. This coincided with a realisation I needed to focus, and that I needed real experience running a business with people that had done it before, instead of being a solo engineer. I dropped my HousePad “project” and leapt in with them. I also decided that instead of continuing to read the latest business books and articles, I’d sign up for an MBA and “formalized” my business knowledge in my spare time while actually applying it.

My first week as an employee of PeopleInsite was a shock. I’d spent all my career working with engineers and technology and found myself in an environment literally surrounded by boxes of paperwork, lawyers and people that organise boxes of paper. PeopleInsite was seeded by a law firm and we were sharing their office. It was so simple working in engineering organizations because the norms and culture were familiar. Being the sole engineer within the space shared by a law firm was a world away. Many of the papers I wrote during my MBA were about understanding myself and my interaction with other people. He had just three employees, the MD with an industrial relations/commerce background, myself for all-tech, and an operations assistant.

Early in 2010 we pivoted PeopleInsite into enableHR, a SaaS HR system that combines HR tools with the HR content and advice. It focused both our technology strengths and partnership with the law firm, and worked really, really well. We grew it from a 5 person team with a handful of customers to 16 employees and thousands of customers in the Australian and NZ markets.

Ready for a new challenge, at the end of 2014 I sold my shares in enableHR so I could focus on something new for 2015.